It’s a sure sign that we’re coming close to the end of the Camera Club’s “season” that we are now invited to offer our best both in print and on screen for the judgement of, well, a judge!  I confess to an increasingly ambivalent view of “judgement” in this context, which seems invariably and perhaps inevitably to be subjective and thus bordering on the meaningless.  Why enter then?  Well, why indeed, and then again why not?!  At least the exercise of selection, by me from my own catalogue, is an interesting one and needs a review of the year past, and that’s quite fun, and possibly even instructive.  “Lightroom” offers many ways to enable such a review and, as I’m finally getting round to reading the instructions on how to use the software, it’s an interesting and instructive exercise trawling through my various flags, colour labels and star ratings.

Here then are six, with some explanation of why I have chosen them.  On the usual assumption that nobody but me will read this, it does give me something to refer back to when the judgement has been made in a few weeks time!

This is the Spa at Scarborough.  The image was made in colour on a beautiful, clear skied winter’s day.  I’ve then converted it to Monochrome, taking down the “blues” in the conversion and increasing “clarity” and “contrast”.  I find the result quite striking given the sunlight on the building and indeed the skeletal trees, the reflections in the wet sand and the radial streaks of cloud in the sky.  I have it printed at A4, but may well decide to reprint at A3 to increase the impact.  It’s sharp from front to back, and I’m very pleased with the ability of the camera to record all of that.

This is part of the Humber Bridge.  The process involved was actually much the same as above, the image being made using the “kit” zoom lens at a focal length of 12mm.  I like the clean lines of the construction, contrasting with the cloud formations in the sky.  The top left to bottom right diagonal formed by the bridge is obviously quite deliberate – serendipity offers an echo of that diagonal in the trees in the bottom left hand corner.

This statue is to be found in Hull and is replicated in Iceland with the pair “looking at” each other across intervening ocean.  This, known as “Voyage” looks in the direction taken by trawlers heading for the Icelandic fishing grounds.  I think the silhouette is important, although the judge may deplore the blocking out of detail in the plinth and statue.  Apart from the evocative nature of its own origin, meaning and significance which I find rather moving, I like the contradiction of the vertical against the horizontal of the opposing shoreline and the cloud formations.

All three so far will be printed, and again I suspect I shall make them at A3 ….. there is a question of whether the mounts should be black, white or something in between!  I have a week or so to resolve that!

This is Scarborough again on that same lovely winter’s day.  This stays in colour; the horizon is straight and the water droplets in the breaking waves are pin-sharp!  There are of course only two surfers and the pedants will demand three, or at least an odd number – well there are two so “get used to it”!  I like the white vignette.  To my mind this speaks of ever widening possibilities outwith the frame rather than seeking to hold the eye inside it, and that’s the “meaning” of the image I think, as these two guys make their way out to the surf. 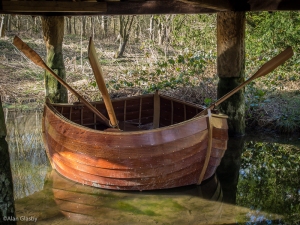 This curiosity is in the “boathouse” at the Yorkshire Sculpture Park.  At first glance it’s a nicely constructed, clinker built rowing boat.  Closer inspection reveals not only three oars, but three bows and no stern.  At least the repeating “threes” should please the judge!  I guess the sculpture itself raises questions about directions … the image is nicely sharp from back to front and I like the contrast between sun and shade, actuality and reflection.  The judge might complain that his eye isn’t led in a particular direction – but I guess that’s rather the point!

And finally ….. again at the YSP.  This sculpture stands (or perhaps sits) close to the entrance / exit gate, and we can speculate as to what it is he prefers not to see.  Again the day was bright and the sky clear blue.  That makes for equally clear blacks in monochrome,  and I really like the simplicity of the result.  Find I don’t have a problem with empty space in an image, it gives me room to think and reflect and perhaps even a canvas on which to explore my own reaction.

One connected thought. I’ve read in an article in B&W Photography magazine recently the thought that high contrast in a black and white image isn’t necessarily a good thing and can almost constitute an assault on the senses  I’m aware that each of the monochrome images I’ve offered here, high contrast is a part of the story and I’m not inclined to change it in these cases.  It’s food for thought though when the zeitgeist seems to demand “impact” and high definition.  Something to look at I think.