This post is by way of a familiarisation experiment as much as anything else.  I have, I think, now established the virtual connection between Lightroom (my currently favoured photographic post-processing software) and both Flickr and WordPress; the latter operates this Blog.  I’m now working out the best way to produce a posting and in particular to present the images within a passage of text.

This posting is concerned with an up-coming competition at the Camera Club which has as its theme a reflection on the concept of “Time”.  It invites six images; I have six selected as possibilities and another still lurking in my mind which I have yet to make. 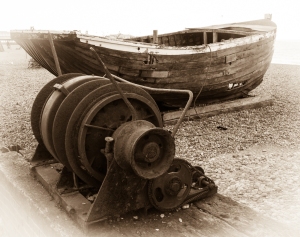 This is the first, and I have titled it “Fading into Time”.  The subject is a restoration project of a fishing boat on Brighton beach with a rusting winch in the foreground.  Monochrome with a touch of sepia seemed appropriate, and in my mind the white vignette adds an element of fading around the edges.  So both objects are fading visually, and also fading as time passes into neglect and decay. 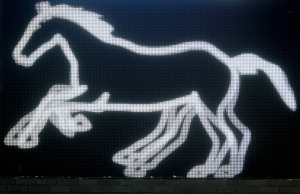 A contrast at many levels, this is titled “Running to Time” and is an image of a “screen” of LEDs at the Yorkshire Sculpture Park.  So the horse is indeed running to a very strictly rhythmic timetable and that motion is caught by the longish exposure set in the camera. 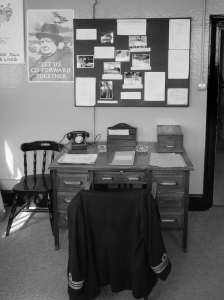 “Times of War” – this was made on the Isle of Wight at the one time fortress that overlooks the Needles.  Clever of them really to offer this representation of “work in progress” made up of a relatively tidy desk, a noticeboard and a poster or two.  The uniform jacket on the back of the chair gives it a very human touch as though we’re waiting for its owner to come back into the room.  The whole triggers an imaginative flight – how was it to wear this uniform, to sit in this chair, to hear the phone ring with news good or bad? 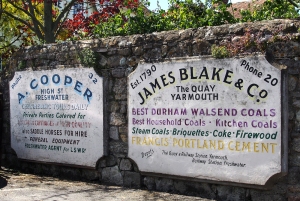 “Times Past”; these advertising placques are suggestive of a very different time when one could hire a saddle horse or order “Best Durham Walsend Coals” on the Isle of Wight. 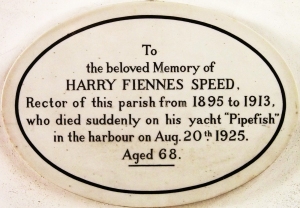 The story behind this memorial in the local church is probably a very sad one – or maybe this was the manner of passing that the Rector would have chosen given the opportunity. Rather obviously title “Time and Tide” … “there is a tide in the affairs of man ……..” 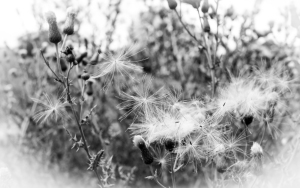 I didn’t want to take photographs of clocks, however handsome or accurate!  Dandelion clocks though have been a child’s substitute timepiece since time immemorial and clusters of these were literally drifting away on the breeze.  Again monochrome felt right and the white vignette just conceals that new ground that the seeds might populate – or perhaps the tine into which they are drifting.  So – “Time Drifting Away”.

These are the six of choice at this point in time …… but I hope to have time this weekend to add at least one more!  If nothing else the process of making the post seems to have worked – I’m just wondering whether to look at another slightly more interesting template for the Blog.  Time will tell!